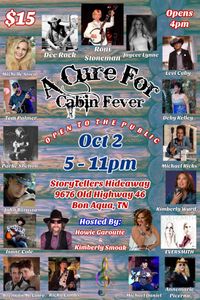 “A Cure For Cabin Fever” is the event name, created with the hope of raising enough funds to prevent an iconic studio from being dismantled and sold off piece by piece. $50,000 is needed in a short amount of time to pay encumbrances against the studio that were only recently discovered. Michelle Storm, current owner of Cabin Fever Productions, has fought many battles to preserve this well-loved piece of the Nashville music community, and has quickly put together an event that will prove to be a fitting and memorable tribute.

The rich history of the studio begins with the original owner, Tom T Hall, and was THE STUDIO of most of today's top Artists from in the 60's, 70's and 80's. Originally known as The Toy Box, recording artists included Loretta Lynn, Willie Nelson, Dolly Parton and Barbara Mandrell…just to name a few.

In addition to this star-studded list, the studio boasts original equipment with historical importance, including a Harrison MR3 console, one of only seven still in operation today.

Hoping to save this important history for future generations to enjoy, Michelle Storm, a Volunteer Committee, along with numerous friends that work in the industry, are hosting a one-of-a-kind musical event. Date: October 2, 2021 Time: 5:00 PM Location: Storytellers Hideaway and Museum, Bon Aqua, TN. Admission is $15 at the door. This event is Open To The Public. Family Friendly.

Storytellers Hideaway was once a retreat for Johnny and June Cash, with a rich history all its own.